On Smashing Pumpkins, My Sister, and SoundCloud Premiere 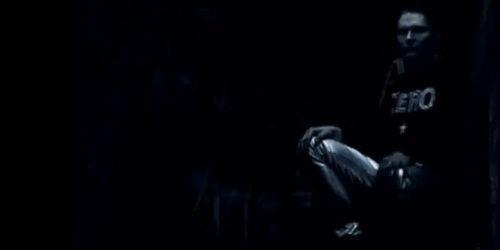 For best results, stream the new record “Oceania” while reading.

I remember watching this music video on MTV in our family’s living room. I was in awe and Maria caught me. She, being an early worshiper of the Church of Billy, reluctantly took me through the entire discography. A few weeks later, we were dueting “Bullet with Butterfly Wings” on the way to church. (Sorry mom)

Now, Maria refuses to admit she was “goth” in high school, but at the very least she was “alternative.” And, I can say for certain that looking up to her edginess was one of the factors that helped prepare and shape me for the music business.

Even though you were totally goth. 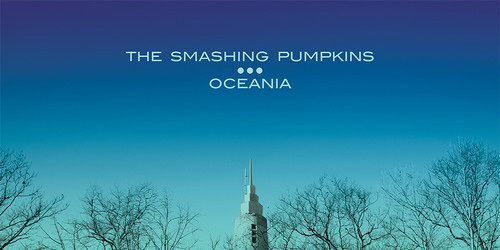 Flash forward 12 years and Smashing Pumpkins [2] are preparing to release their 9th record, Oceania tomorrow, June 19th. Critics agree that this record rocks and even Billy is saying it’s the band’s

I agree. It’s a refreshing shot of early 90s nostalgia with a couple of young guns backing Billy.

The lovely and tech savvy Rynda Laurel [4], whom works for the Pumpkins, contacted me about building a custom SoundCloud player that could be used to debut the first stream of the record on the band’s website.

It just so happened that I was in the process of conceptualizing the next version of Premiere and the band agreed to help Beta test the new software by utilizing it for their premiere.

They were my first and now my app was going to be used first by them.

I released Premiere 1.0 last year as an idea of what I thought a standard record premiere should be like in terms of design, social, accessibility, and functionality. 1.0 has been used by many artists to debut their albums, including: 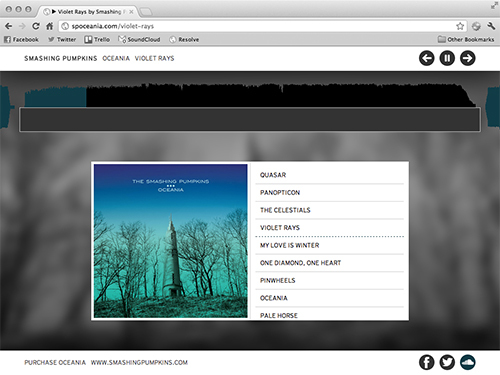 I converted the app from a basic Sinatra app over to my Hipster Stack of Node.js, Jade, and Stylus for rapid development. I chose to use Backbone.js similarly to how I utilized it in Stratus 2 to define a basic player structure. It’s really nice to be able to define a single model for tracks and use it for multiple views. In this case, the model is used to create a track list item and each waveform sound element.

In an effort to make deploying the app even quicker, I’m pulling as much data from your SoundCloud account, album, and track as possible. Simply adjust the single setup line and everything will populate automatically.

What I’m trying to say is be sure to fill out those SoundCloud profiles completely, and this app will make your life easier.

I was going to write an entire section on waveform coloring (exciting, I know) here, but I’ve decided to wait until next week because Johannes and I have written a new library called Waveform.js to handle this. More on that soon. ;-)

I’ve used it in Premiere 1.5 to construct the sound navigator which is heavily inspired by our team’s work on [SoundCloud Next](next.soundcloud.com).

Each album track is given its own permalink mirrored from the its SoundCloud permalink url. This permalink also drives the URL system of Premiere 1.5 which will change automatically via history.pushState. This allows for deep linking and individual tracks to be shared.

I’m going to build more of the JavaScript SDK’s authenticated functions like commenting, liking, and following right into the app. Once that’s done, I’ll document the app and make it available via open-source on Github.

Premiere 1.5 represents a stepping stone to 2.0 which will see the app being hosted for the first time. This will make it as easy to deploy an album premiere as it is to launch an email for download campaign with Email Unlock.

Oh, and if you enjoy the record, make sure to go out and buy it.

[1] I have three sisters total. Hey Melissa and Mallory! Two brothers also. But, I’ll always be one of the girls.

[3] Rynda has had an incredible career in the music business and recently founded 1968media where she helps digitally manage artists.

This is not The Greatest AMA in the World, no. This is just a tribute. Reddit, the self-described front page of the Internet, is a social network in which users submit links to anything interesting on the web and then vote (up or down)... Continue →