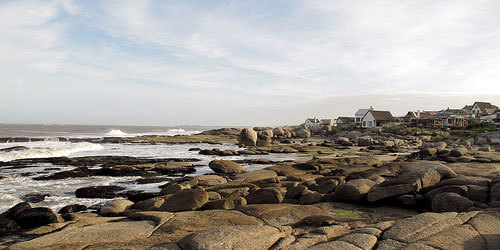 Hacking in a Hammock

When Jo and I started planning The Endless Hack, we tossed around the concept of “extreme” hacking. That is, creating software in locations that lacked the ideal infrastructure of power and fast internet. This idea was sparked by Chapelle Saint Michel, a tiny little church on an island in the Bretagne of France (where we launched the project) which was only accessible twice a day due to the extreme tidal conditions of that region. We thought it would be fun to go out to the island and attempt to hack something inspired by the church within the tidal timeframe the English Channel provided. We knew full well that there wouldn’t be power on the island and chances of pushing code were pretty slim. However, I believe constraints are important in hacking because they keep you focused on producing an actual product in the time provided.

This idea is one of the main reasons we chose Punta Del Diablo as our first offsite, and while it wasn’t quite as extreme as our church idea, it did present several challenges that made for a pretty interesting hack.

We borrowed internet from our Airbnb’s next door neighbor [1]. Network name: gustavo. Password: puntadeldiablo00. Our hosts said it was “okay,” but I don’t think they realized just how much internet we would be hogging and in some cases Uruguyan internet providers cap your internet usage and charge overage fees. Maybe that’s why on the last day the network name was changed to “inside the dog” and was given a new password.

Oh, it was shit, and led to a pretty funny power dilemma. You see I’m on a MacBook Pro with retina and Jo has an original MacBook Air, so we have two different types of power connections (MagSafe 1 vs 2) which require a specific power converter to fit Uruguay’s outlets. Which we only had one of… That meant we were constantly reconfiguring our power setups to keep our laptops charged. What made this even worst is that the “good” internet signal, out on the balcony in a direct line of sight to the neighbor’s router, was about 2 meters out of range from the maximum stretched length of our power cords. That meant you had to chose what was more important: power or internet, and reconfigure / reposition accordingly. Also, anything beyond just pushing code required us to literally walk up to the neighbors window and hold our laptops to it. This led to a lot of dead laptops and botched uploads.

Did I mention my trackpad died? Yes… Apparently I spilled some sort of liquid (I’m guessing beer) into it back in Montevideo. Luckily I brought my mouse, but that meant in addition to the power issues above, I also needed to find a flat surface to work from. I rotated between the bar downstairs and the deck of our balcony while Jo spent 90% of his hacking from the hammock.

Once we nailed down the idea and established all limitations on technology, we were ready to begin hacking. We had less than 24 hours to build the app, document it, and present it to Stockholm.

[1] Speaking of extreme, this neighbor owned an old VW van which he apparently drove down to Punta Del Diablo from Canada.

There comes a time in every programmer’s life when he must seek out help in order to have a project (or projects) realized. That happened for me three weeks ago, and that help came in the form of Johannes Wagener. Jo and I met two years... Continue →