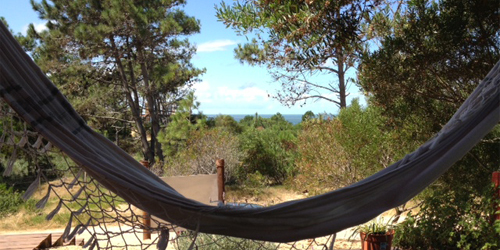 Hacking from a Hammock

We arrived in Punta del Diablo on Friday evening by way of a WiFi powered COT bus traveling the vast nothingness of Highway 9 on the Uruguayan coastal highway. And by nothing, I mean one tree for every square mile of plains and hills as far as you could see. Occasionally the bus would come to a stop on the road or in a village and locals would silently jump on, because the driver kept the door opened for the entire journey. I would lower my head to get some writing done, and the second I raised it three new passengers would be standing in the aisles right next to me, as if they were all in on the prank.

The trip took around five hours to make it from the Tres Cruces in Montevideo to the bus stop in Punta Del Diablo where Martin, one of our Airbnb hosts was waiting for us in his 4-wheel drive. While I did refer to Jo as my “partner” in the room request, I think it was plain to see from Martin’s realization of just how straight we were, that we would rather not share a bed and a misfortunate misreading of the B&B listing on my part (double bed does not mean two beds) would have Jo and I sharing a mosquito net later. Oh, well.

A quick drive down a labyrinth of dirt roads, which Martin assured us would be navigable by foot at night no matter how drunk we ended up, led us to Terraferma, Alessandro, Martin, and their dog’s home, and ours for the weekend. The view from the front porch, given our close proximity to the beach and Parque Nacional de Santa Teresa, not to mention the city of hippies and tents we passed on the way end, reminded me a lot of Big Sur.

We entered our new home and were greeted by our non-english speaking Brazilian roommates, a guy and gal, both fresh from the beach who I would imagine also assumed Jo and I were a couple. However, I don’t even think English could have saved us when we tried to explain to them that we journeyed all the way to the north coast of Uruguay from Los Angeles and Berlin to work.. on our computers.. and participate in a hacking competition happening in Stockholm.

And so began our first off-site.

May you live to be 100 and may the last website you see be mine. Four years ago my niece received a microphone and stand, preset with a few classic diva tracks for Christmas. It also just so happened to be the “Christmas the TV broke”... Continue →