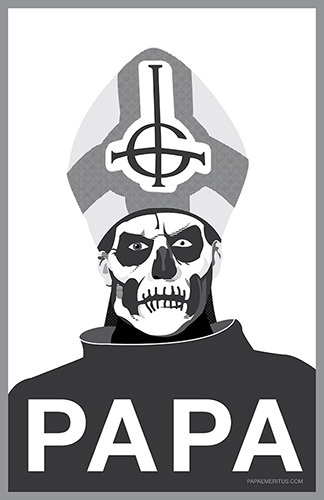 or How to Run a Papal Election Campaign

One proven way to generate extra traffic in Internet marketing is to associate your campaign with major world events somehow. Maybe it’s the Superbowl, Oscars, or in the case of my last campaign, the Papal Conclave. The trick is to react quickly and cleverly in an effort to become part of the massive conversation already happening organically.

We wanted Ghost B.C. to have a presence in Austin at SXSW even though they weren’t performing. Trying to make an impression among all that noise and BBQ is not easy, but we were handed a, dare I say blessing, when Pope Benedict XVI stepped down and forced an election for a new Pope.

We decided to craft a “Papa Emeritus II for Pope” campaign that existed in both the real and digital world via old school printed flyers and the website papaemeritus.com, which allowed fans to cast their vote for Papa and unlock the band’s newest track, Year Zero. The first thing we needed was an image.

My thinking is that real world campaign “conversion” of a text-heavy flyer design was going to be low within all that noise at SXSW, so I opted to design something much more iconic and dropped in a subtle web URL for good measure. The aesthetic and layout of the poster is an obvious bite of Shepard Fairey’s massively successful Hope poster for President Barack Obama’s 2008 election campaign with a Ghost B.C. twist, of course.

I began by sketching Papa Emeritus II from a source image with my 24 pack of Sharpies in an effort to abstract his most prominent features like his Mitre, white eye, and ghoulish scowl. This sketch served as a guide I could use in Illustrator to digitally draw all the shapes I needed to create Papa. I found an excellent pattern pack by Grant Friedman that assisted me in creating the cross-hatching which adds a nice lighting variation.

Finally, I dropped the word “POPE” or “PAPA” in as 250pt Helvetica Bold and sent a print ready version of the flyer over to Austin for pasting. 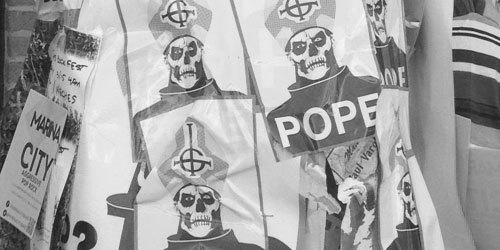 On the night of Sunday, March 10th, our flyer crew hit the streets of Austin and what commenced was the best pasting campaign in the history of SXSW. They absolutely fucking killed it. Papa was everywhere. Even though I couldn’t make it to Austin, I immediatley started receiving countless tweets, texts, and photos from my friends who saw the poster. Hell, Jason Feinberg even ripped one down as a souvenir since he’s such a fanboy.

There were so many great reactions on Twitter to the posters I couldn’t possibly post them all, but here are a few gems.

In addition to blanketing Austin in paper, we ran a complimentary Internet campaign at the same time from papaemeritus.com. The idea was to use the Papal Conclave tradition of casting paper ballots with the Latin heading “Eligo in Summum Pontificem” (“I elect as Supreme Pontiff”) to give all visitors the chance to channel their inner Cardinal and vote for Papa Emeritus II. This scheme also came with the added benefit of pulling an email address and some location data from the user for future mailings via the Facebook Graph API.

Once the fan’s ballot was cast, it activated the Year Zero ritual which allowed them to stream the band’s newest track. If you haven’t heard it yet, go right now to unlock it and be prepared to witness one of the most fucked up videos I’ve seen in a long time very soon… I seriously couldn’t watch it alone in my new apartment at night.

In addition to the site, we had an opportunity to react to the actual election progress on our Twitter and Facebook by demanding a recount when Pope Francis was elected. Side note: my buddy Pip suggested we come out and say Pope Francis was actually Papa without his mask on, but I didn’t think I could get that one approved…

I feel like the campaign could have been even bigger with more varied competing reactionary content, such as video, live stream from a fake papal election, or photoshopped photos of Papa in social situations. More parody, basically.

However, it goes to show that some old school tactics with new school execution can be quite successful even in over saturated situations if you can develop the right imagery with the perfect timing and context.

Thanks for reading. You can expect more from our Ghost B.C. campaign in the next few weeks leading up to the Infestissimam release. Follow me on Twitter for the latest and please let me know if you have any questions or comments.

Minting $1,500,000 at the Federal Reserve of Foo Fighters A little over a week ago, the Foo Fighters played both Reading and Leeds festivals in the UK. Each of these shows ended in a confetti cannon launch of several hundred thousand... Continue →