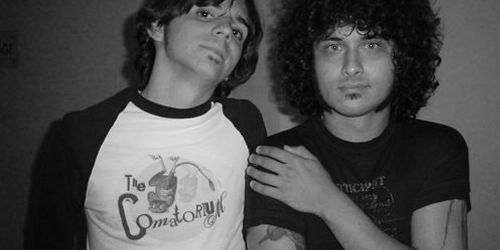 An origin story about forums, donations, and death.

At the end of my senior year at South Terrebonne High School in 2003, I was inspired by Mr. Boudreax’s Programming 101 class to develop a website. It just so happened that my buddy Brady and I were getting into At The Drive-In at the time. A band that recently split up into two bands, Sparta and The Mars Volta, at the height of their career. ATDI wouldn’t reunite for another nine years, so we had to make due with the side projects.

I chose Sparta initially because “Cut Your Ribbon” seemed to sound a bit more hardcore and at this angsty part of my life, I required it. I remember catching them at the Shim Sham Club in New Orleans in 2002 with my sister Maria. They were rad. However, their record Wiretap Scars had been released a year earlier whereas TMV had yet to release a full length. I decided that TMV was ripe for a website.

I initially created a very simple TMV media website called TMVA or The Mars Volta Archives. TMVA got me in touch with a guy named Joeri Voogt who just so happened to be building his own TMV fansite and we decided to join forces to create The Comatorium.

We figured Joeri’s PHP skills combined with my frontend design skills stood a chance against the current fansite leader, Inertiatic. My first contribution? Replacing Joeri’s purple aesthetic with the now classic mint green. One of the best decisions of my life. Joeri became busy having a life (luckily I had none at the time) so I took over running The Comatorium.

The site itself was pretty basic but we launched it with one killer feature that would effectively takeover its purpose: the forum. The Comatorium Community was powered by Invision Bulletin Board and it ran seperately from the site. I took on the persona of Theory, the butcher, to protect my identity because the message board quickly had more members than the population of my hometown.

Was I good at running the site? Well, sometimes…

Do you remember message boards? They’re tough to manage… to say the least. The $200 server I was paying for every month probably led me to be a little power crazed from time to time, dropping the ban hammer too often and over-moderating. I remember feeling truly hated by some members, but then meeting them in real life and becoming best friends. It was a great lesson in the reality of what the site and I were truly creating: a community. You can’t manage the internet, and you definitely can’t take it personally.

Then, The Comatorium crashed.

The band was about to release “Deloused in The Comatorium” and the forum was growing out of control. I didn’t have a job, apart from mucking stalls at a local ranch, so I couldn’t afford to keep it running. It seemed like The Comatorium was marked for death.

That’s when I received an email from the band’s manager [1] saying they would like to make a donation to keep it alive. TMV has never been a band that communicates with their fans, so to receive this official transmission was shocking. They said something along the lines of

Our official site sucks. Yours doesn’t. Here’s some money.

In less than a week, I received a check in the mail and The Comatorium was back online. But more importantly, I was now officially communicating with the band’s management company, Silva Artist Management. They even started sending me a little work here and there for some of their other artists.

I was working in the music business.

Soon after the band’s endorsement, we coordinated our first major news story. Jeremy Ward, the bands vocal operator, was found dead in his Los Angeles home from an apparent heroin overdose. He was 27 years old then and only a few weeks away from the “Deloused in The Comatorium” release.

All emotions about forums, donations, and music were gone. They were replaced with a very real feeling of tragedy and confusion. I can remember exchanging emails with Jeremy’s family as they coordinated mailing me memorial photos for the website. I’ll never forget how strong they were then, and we’ve done our best to remember Jeremy over the years together.

The Mars Volta went on to release “Deloused in The Comatorium” to critical acclaim selling over 500,000 copies.

I started working on the band’s official site while in college during “Frances the Mute”, a record inspired by a diary Jeremy found while working as a repo man. I ended up moving out to Los Angeles to work for SAM and kept running The Comatorium personally until a few years ago [2]. It’s now run by Nardo.

[1] Kristen! We’ve worked together ever since on client work, ideas, and tans.

[2] The truth is, I stopped running The Comatorium when The Mars Volta let SAM go, but that’s a whole other story. ;-)

Four is the magic number Bloc Party are back from hiatus [1] and are preparing to release their fourth record, appropriately titled “Four,” next week on August 20th. In addition to this being the band’s fourth release, it also represents... Continue →