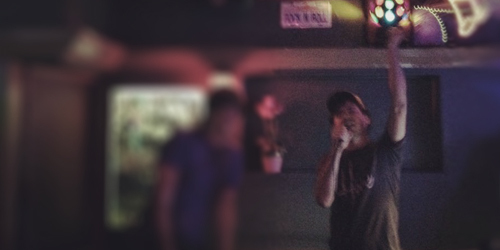 A group of friends and I have been karaoking quite regularly at a particular dive in Hollywood’s Koreatown. I won’t give away the name because it’s our dirty little secret and we basically run the place when we’re over there. It’s not located in the safest part of town so we tend to roll deep for safety. My rule is, “There must be more people in our party than patrons at the bar.” Luckily for us this particular spot only has about three regulars at any given time.

There’s the guy with one (maybe two) teeth, who loves Frank Sinatra so I make it a point to lounge “Lady is a Tramp” once or twice a night for him. Then you have shy latino guy who always finds the courage to get on stage before the night is over. He also thanks you, very seriously, for your choice of Nickelback and Creed. Love that guy. Finally, you’ve got a diehard Social Distortion fan that has definitely had a few too many, considering how often the bartender threatens to bash his knuckles in if he won’t stop screaming and banging on the bar during conversation. He tends to doze off around 9:30PM or so.

Oh, and speaking of that bartender: she’s incredible. A tough korean lady who knows you’re drinking Coors Light, calls you her son, and makes sure you’re properly hydrated throughout the night… which may have something to do with the lack of air conditioning. No matter. There’s an armada of tiny fans and if you sit at one particular corner (the one closest to the stage) it’s actually quite refreshing. Did I say stage? I meant 4x4 foot curb that fits two comfortably (Leather & Lace) and four barely (Bohemian Rhapsody.)

Depending on what night you’re there, you’ll get one of two Karaoke DJs:

Every single time we go (and I mean every single time we go) we meet someone awesome. A wildcard. Some nights it’s a Hollywood record producer taking a break from tracking. I’ll call him Hollywood Condiment. Then there’s that one guy who was obviously on a failing date and spent 50% of his time arguing with her and 50% dueting Little River Band with you. I wonder whatever happened to that guy…

Anyway, my reason for telling you all this was because an incredible occurrence happened there a few weeks ago. You see, this bar is cash only. It also happens to be right next door to a cash only non-stripping strip club called… well, I’ll just say it probably influenced the Louis Vuitton Don. If for whatever reason, we find the urge to pop-in post Karaoke, we need to make sure we’re carrying the appropriate amount of cash to, you know, pay the employees. If there’s one thing this particular section of K-Town doesn’t have, it’s fucking ATMs. And besides, as mentioned earlier, you don’t want to be walking around here when the sun goes down.

My buddy and I were discussing this fact at the bar and our conversation was overheard by the barback. He moseyed on over to our corner, and very politely said, “ATM?” This is the first time my buddy and I look over to each other and nod yes, “That would be nice, thanks.”

Maybe it was all that karaoking and Coors, but we’re now following the barback to the rear parking lot or as we call it: the secret entrance. (You know, for VIPs and such.) I’ve been in this parking lot before. There ain’t no ATM. So what’s the deal?

We are now in a stranger’s vehicle bound for… well we’re not sure exactly. It’s at this point that we give each other the third glance and begin to second guess our decision. Right about the time we’ve exhausted every murder scenario in our heads, he pulls up to… the Bank of America. We jump out, make a withdrawal, and return to our chauffeured ATM-mobile back to the bar.

Maybe I was relieved that he didn’t drop us at the LA river, or maybe it was because I knew I was going to be able to write this blog post, but I gave the guy a $20 tip. Ok… it was because the ATM only dispensed twenties… Regardless, we made it rain that night. While we have revisited the bar several times since then, we have yet to utilize the ATM again. Though I don’t think we would hesitate. You gotta be bold.

The Endless Hack has begun and what a start it has been! I’m currently writing this tutorial on a Buquebus timezone crossing Rio de la Plata, the Silver River, from Argentina to Uruguay. We chose Buenos Aires as our first destination... Continue →